It was cold and grey, the wind blowing a gale out of the East. In the house on the hill overlooking an angry sea, a young Greek virgin lay, still and stretched, on a slab of cold white marble. She was breathing slowly, eyes wide and staring, unaware of the moan of the wind and the slapping of wet, dark leaves of the olive trees against the window. Unaware of the rustling of the man as he searched in a worn plastic shopping bag occasionally pulling out a piece of gleaming metal or wad of material.

I watched silently as the man, short and dark, dressed in baggy pants and a ragged green sweater, finished with the bag and reached for a cracked and torn plastic apron. The kind the local fishermen wore as they cleaned their catch on the old stone wharf down in the village. Tying the apron high around his chest under his arms, the man murmured, "Tamam, tamam. Oldur kedi," seeming to address the form awaiting him on the marble. He chose a sharp instrument and approached. The walls closed in and began to sway as I, unable to watch any longer, bolted from the house into the welcoming gale and the rain....

Fiction? Nope, not a word. And what was the short, dark man murmuring? He was saying, "OK, OK. It's alright, kitty." And what was he doing? He was "fixing" Doxy, the kitten we picked up off the streets of Piraeus last summer. To make a long story short, Doxy's spaying operation, performed at a friend's poorly lighted, poorly heated, draughty house on the kitchen counter, took the non-English speaking Turkish vet two and a half hours, all his ether, and several injections. She never closed her bleary eyes, and she watched the whole thing (which was more than I could do). The vet said (according to my Turkish friend) he was afraid to give her any more anesthetic as he'd already given much more than he should have. As the whole house smelled of ether, we kept giving the vet strong black coffee hoping to keep him awake till the end of the operation. And less than one hour after the operation, Doxy was back on Promise, wide awake, staggering wildly around the boat, and trying to tear out her stitches. Except for the staggering, she was like that for two weeks! We were afraid to let her tear out her stitches because the vet only visits our area once a week. If she needed restitching in the meantime, guess who would have to learn how to sew. (And I don't even do hems or buttons!)

The fun lasted up to the very last moment. After arriving on time for Doxy's last check-up, we found the vet running behind in his appointments. We had to wait our turn behind two camels and a cow! I guess we were lucky to even find a vet who had some experience (according to him) operating on cats. The Turks are generally afraid of dogs and very laissez faire about cats. We've been told that cats are "sacred" animals so can't be destroyed, but the sacredness doesn't seem to extend to feeding or protecting them. Ah well, can't get too upset over the plight of animals here when many of the people don't live any better. American friends of ours in Izmir were offered the youngest girl of some Kurdish gypsies living in a nearby vacant, muddy lot in plastic and cardboard covered huts. The offer, as the gypsies pushed their little girl forward, took the form of, "Take, take. Please take."

Otherwise, things have been pretty quiet here. We have made some new American friends in Izmir. One couple is in the US Air Force working with NATO. He's a Ham (TA/K8KI), and she's a carpet buying nut ($/USA). She keeps coming home with these Turkish carpets "on approval". When her husband says, "No. Take it back," she does but comes home with a new batch that she just couldn't resist. On Saturdays while Bob and George stay at the apartment and play with their radios and computers, Mary and I go off to the carpet shops in the bazaar to trade in the latest batch of carpets she hasn't been allowed to keep. Of course, to make the game interesting she's allowed to keep one every once in a while. On Christmas day we had a lovely American dinner with Bob and Mary with everything straight from the good ole USA via the BX, including the Butterball turkey!

Another couple with whom we've made friends are Martin and Anna Berkofsky. He's American, she's Icelandic. They are both concert pianists playing with the Izmir Symphony Orchestra and teaching at the Izmir conservatory. Martin is a Ham also (TA/KC3RE), and is into EME (bouncing radio signals off the moon back to earth). As you can imagine, there aren't many people in Turkey who share his enthusiasm. So he and George always have lots to talk about. In addition to ham radio, Martin's talents are incredible. Last Saturday we went into Izmir to hear him (accompanied by a 74 piece orchestra) play a Mozart Rondo and Liszt's Totentanz. He was unbelievable! For an encore he played his own arrangement of Stars and Stripes Forever, and the audience loved it. Especially the Americans. All 4 of us.

So much for our cultural activities. Oh yes, except for the weekend we invited Bob and Mary to deve guresi with us in a little town near Kusadasi. (Kinky, huh?) Since deve guresi is such a well-known sport, I'm sure you don't need any explanation...well, maybe just a little. It's camel wrestling. And it's colorful, to say the least. The wrestling is done by Tulu's (specially bred male camels) dressed-up in multi-colored braided harness, and draped with beautiful carpets, tasseled and embroidered doo-dahs, large "camel" bells and dozens of smaller "reindeer" bells which ring and jingle with the rhythm of the camel's swaying walk. During the wrestling match each camel is attended by seven Urganci's (rope handlers) to make sure these valuable animals can't hurt each other. One of the Tulu's is declared victorious when he either makes his opponent flee the fighting arena or makes him roll over on his side by using various camel "tricks". (And you know how tricky those camels can be.) How do they get the camels to wrestle? All it takes is one little female paraded around in front of the Tulu's. (She really doesn't look worth fighting for. But not being a male camel, what do I know?) The wrestling matches are very important events and are attended by thousands of men. And I do mean men. The women with our party were among the handful there. 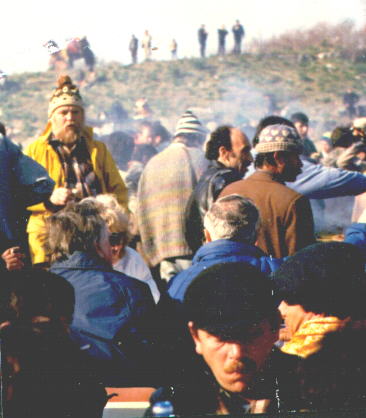 In addition to the ongoing matches watched by these thousands of screaming, cheering men, there are musicians strolling through the crowd playing primitive harsh-sounding wind instruments and beating well-beaten homemade drums. (A 2 for rhythm, a -1 for melody, and a 10+ for loudness.) Solemnly dancing to this "music" are boys, and men of all ages, some of them quite old and dressed in antique embroidered Turkish militia uniforms with ammunition belts around their waists and beautiful high leather boots on their slowly stomping feet. They take their dancing very seriously and ceremoniously fire a large pistol every so often. Sometimes they even fire it into the air.

Mixed in with the spectators, musicians, and dancers are the rustic, rickety, smoking grills of the sis kebop bufe's offering kebop on half loaves of bread, Efes beer, and Raki (Turkish Ouzo). And vendors with huge trays of sesame donuts and gooey sweets balanced on their heads weave in and out of the crowd hawking their goodies, "Iki icin bes yuz, iki icin bes yuz...." ("Two for 500.") Tethered in the midst of all of this are the nervous, hobbled winners of each of the day's matches, more and more of them as the afternoon progresses. Each of these camels is attended by his mascot (a little female camel, dog, donkey, or tractor) as he proudly stands dressed-up and splay-legged, tail flapping in and out between his legs liberally sprinkling passers-by, head tossing strings of foam from his mouth into the air. Over the back of each of the winners are thrown his prizes: a new carpet and a brass tray. 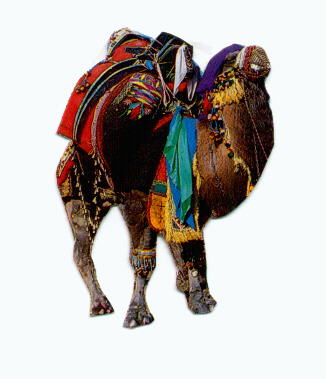 The actual fighting arena is fenced, but occasionally one of the losers knocks down the fence and comes charging out chased by the winner, each dragging his seven rope handlers, scattering spectators, sending sis kebop grills and Raki bottles flying, and exciting all the other camels who lunge against their tethers their bells ringing wildly. Everyone in the path of the runaways flaps his hands and screams, "Allah, Allah, Allah..." (I said a few Allah's myself. It seemed like a good idea at the time.)

As though all this weren't enough to boggle the mind, the site for the wrestling was the stadium at Ephesus which predates Christ and is where the gladiators fought wild animals and Christians were murdered in the 3rd and 4th Century. It's a day we'll long remember.

Well, so much for the social whirl in Turkey. I guess I should also bring you up to date on "As the Boat Floats". George is still plugging away at his book. I'm not managing a Turkish marina as I'd need resident and working permits. The required stacks of paperwork and the days (literally) of cay drinking with various government officials would leave no time for the actual work of marina management. Even just as tourists we must renew our visas every 3 months which requires several all-day-long- smile-plastered-on-the-face-cay-drinking trips into Aydin on the Dolmus (the "stuffed" minibus). So no marina job.

And that about does it for now, so as they say around here...Allahaismarladik.