Well, here we are in Asia in a Moslem country bordered by Greece and Bulgaria to the West and by Russia, Iran, Iraq, and Syria to the East and South...

...where the Prime Minister recently ordered an election as a show of support for himself and, when he lost, decided to stay in office anyway.

...where the women are seldom seen outside of their homes while the men, the faithful, answer the Imam's call to prayer sung from the minaret of the mosque five times each day.

...in a country which is the home of the Whirling Dervishes and where the traditional sports include grease wrestling (self- explanatory - yuk), the javelin game (they throw javelins at each other on horseback), and camel wrestling (the camels have all the fun).

...where the language belongs to the Ural-Altaic group, includes the letters c, g, o, s, u, a dotted i, and an undotted i, and where I can't write the word for goodbye all in one pen stroke. ("Allahaismarladik" is said by the person leaving. The person being left replies "gule gule". I make it a point never to leave first. Being left is bad enough.)

...and most importantly, in a country where the people have been the friendliest, our welcome the warmest, the prices the cheapest, and the sights the most exotic.

The weather now is fantastic with just a nip of fall in the air, and we understand that January is the only really cold and wet month here. We haven't seen rain in 5 months, super weather for our summer of island-hopping in the Aegean islands of Greece with only one bit of excitement. 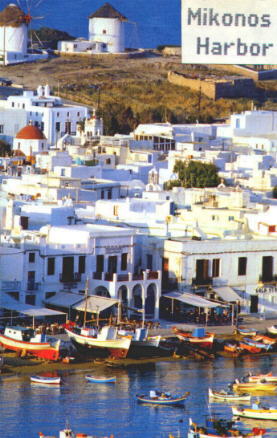 After having been anchored in the harbor of Mikonos for 3 days, we were chased out of the harbor just before dark by the harbor pilots. They wouldn't give any reason or answer our questions so we left and had a rather uncomfortable night sail - no moon, malfunctioning Sat Nav, navigational lights on shore that didn't agree with our brand new light list, unlit fishing boats, and so on...but you've heard similar stories from us before - to the next island, Samos where we were given a great welcome and had a great time. One of our Brit friends, however, refused to move from Mikonos when told to, and they told him he would be hauled off to jail unless he immediately paid a 50,000 drachma fine (about $400 US). So, I guess our night sail to Samos wasn't so bad after all. 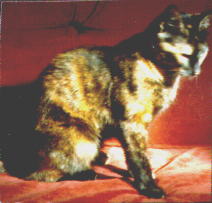 Other than that one instance our visit to Greece was endaksi (OK). And speaking of endaksi, we now have a third crew member aboard Promise. She's about 3 months old now, her name is Endaksi Ghatoli (OK Kitty), her Ham radio call is ME0W, and George calls her Doxy cause he says she acts like one. She was living under a car and living off cake scraps from a nearby shop. She was a very sick kitty and begged us to take her home. We couldn't say no! Doxy has been to vets on 2 different Greek islands (an experience worth a chapter on its own) and is still too small to have her shots and get an International Health Certificate. But we think she's endaksi now.

I worried about what the Turks would do to her (and us!) if they caught me smuggling an unshot, uncertificated Greek into their country, but they didn't even ask or come aboard. In fact, as we entered our first Turkish port and approached the customs dock we were told "welcome, welcome" and to come back later (it was 11:30 AM) because the customs people were "very tired". We just smiled, said our tesekkur ederim's (thank you's) and wandered off to find a Turkish beer to celebrate our arrival.

Are we into the spirit of Med cruising, or what? So, here we are. We'll be able to report more later this winter, but so far Turkey is as wonderful as promised. Bye for now.