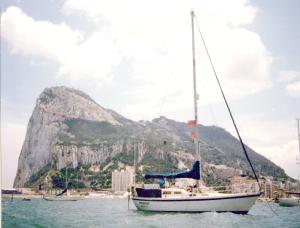 There may be doubt as the peak that marked the southern Pillar of Hurcules but not so for the northern one. We are anchored in the shadow of the Rock of Gibraltar. It took us a year minus just a few days. We'll be here for another week installing all the doo-das that are available only at the chandleries in Gib, at least in this part of the world. Being in an English-speaking enclave sure helps the projects go smoothly (not to mention the assistance of a few pints of bitter and some fish and chips occasionally).

All is OK on Promise, and we have no news except that we're on the move again. So might as well go back a month and 150 miles or so to Sevilla.... Semana Santa and La Feria de Primavera were unbelievable! Semana Santa was a whole week of holy parade, each one consisting of several thousand marchers in costumes just like the KKK, pointy hats, hoods and all. Each marcher carried a 4 foot long candle, and they marched solemnly two-by-two in a seemingly never-ending line in front of their Jesus or Virgin paso (float). Each paso weighs about 1/2 ton and is carried by 36 men. Each parade lasts for about 12 hours! Many of them are at night and wind eerily candle-lit through the narrow twisted streets of the old town before entering the cathedral to be blessed. Some of the "penitents" carry heavy wooden crosses and walk bare-footed with chains around their ankles for the whole twelve hours! The favorite virgin is La Macarena. Her paso is gold and silver plated, draped with richly embroidered silks, crowded with white flowers and white 4 foot-long candles. Macarena is beautiful, cries crystal tears, and is dressed in a gown and cape of embroidered silks and velvets with a huge gold, diamond, and emerald halo. In her outstretched hands she holds rosaries of precious stones, gold and silver. As Macarena passes through the streets some people cry; some pray and cross themselves; some simply stand entranced; while others are cheering, "Ma-ca-re-na...guapa, guapa, guapa!" And she was guapa. Beautiful.

After surviving Semana Santa we had about two weeks rest before Feria...hundreds of casetas spread over several square miles; a hundred thousand people in Feria dresses and suits; hundreds of horses and carriages; many thousands of bottles of Sherry; Sevilliana (flamenco) music played by cassette tape, small groups, a fife and drum musician, sung by hand-clapping groups of strollers, or the beat absentmindedly clicked out on the castanets by a passing Sevilliana girl on her way to a friend's caseta. The party lasts each day from noon to 8 a.m. the next morning and goes on like this for seven days! We were invited by some Spanish friends to the Ham radio caseta and participated in a couple all nighters. But not being Spanish we didn't last a whole week. Our favorite part of Feria is the early afternoon of each day when the horses, riders, and carriages parade from caseta to caseta for their traditional glass of Sherry. The horses are braided, groomed to perfection, and adorned with fancy harness and velvet puffs and tassels matching their owner's outfits. The men dress in the traditional Andalucian gray tight- fitting, short-jacketed suits with broad brimmed hats. The only touch of color they sport is a sash matching the dress of their lady and the horse tassels. The traje of the women is usually very brightly-colored, much ruffled, lace trimmed; and topped off by a tasseled mantilla, flowers in the hair, and castanets in the hands. The typical feria dress is made of about 30 to 40 meters of material. All-in-all it's the best party we've been to in a while, and it was a fitting end to our stay in Sevilla.

By the end of Feria and our 6 plus month stay there, we were anxious to move on to new waters, but also sad to say good-bye to marina life and all our friends. Of course, we'll always remember the city itself (guapa, guapa)...but also our attempts at learning Spanish (picture us with limited Spanish in the transmission shop pantomiming our slipping transmission with its odor of burning rubber); paella parties in the garden (made to perfection by one of the French! couples in the marina); welcoming a new member of the cruising community on the French boat next door (it was a girl, and they named her Marina); giving English lessons (and laughing over the fact that the English "Oh dear." translates into the Spanish "Aye!!!"); throwing our skills into the community "pool" for all the projects that needed doing on the 30 some boats on the river (George fixed 5 autopilots, 3 vhf radios, 2 generators, 1 TV, and numerous misc); and our very typically Spanish exit and send-off (the bridge was two hours late opening, one of the other boats had a fouled anchor and missed the bridge-opening, and our Sevilla friends fired flares over our heads during all this).

So, we've had springish weather with some beautifully warm days and some blustery, stormy ones. Sailing through the tide rips in the Strait of Gibraltar was interesting as we were hit by a cold front, high winds, rain squalls, no visibility, and lots of big ship traffic. All this combined with the boiling water of the tide rips which seemed to jump straight up into the air...nothing dangerous...made it seem like a scene from some sci fi movie.

Our plans? Gibraltar till our work is done then on into the Med. I'll send postcards.