Sorry it's taken us so long to write again. I'm sure you're thinking it's about time. Well, it is. And we had such a good one in Bermuda that I didn't ever get around to a second letter. You know how time flies.... 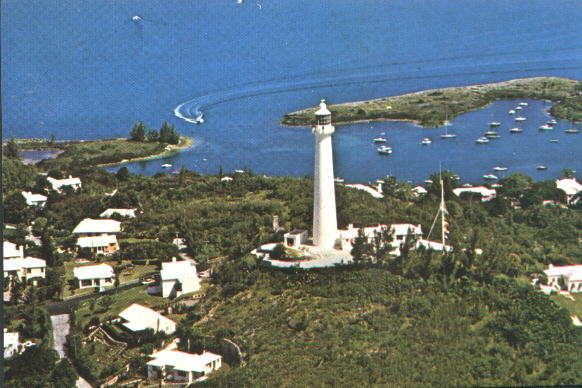 For three weeks we played tourist in Bermuda at all the museums, forts, art galleries, lighthouses, botanical gardens, and pubs. We bussed from one end of the island to the other frequently, all of it clean, quaint, beautiful, and flowered. There are flowers around all the white, pink, and turquoise homes. The roofs are all a special terraced tile, plastered and painted white for rain catchment; and large concrete cistern areas on the sides of the hills are common. Of course, always surrounded by a border of flowers. Can you tell we had a good time in Bermuda?

But it was too soon departure day. I should mention that just before we left, we did one last provisioning shop. We needed fresh veggies, and I especially wanted a large bunch of the famous Bermuda onions. We shopped all the grocery stores in St. George's, as well as those in neighboring Flatts. Only the puniest selection of onions! Where are all the onions? This is Bermuda after all! We gave up on the onions and stopped in to visit St. Peter's church, famous for its gorgeous 18th Century cedar interior. As our eyes adjusted to the dimly lighted interior, I saw large bags of scrumptious, perfectly formed onions hanging off the end of each pew. And there was a huge pile of them in front of the altar. "ONIONS!" I exclaimed much too loudly for a church. Everyone in the church stared at me. I left a donation and beat a hasty retreat through the graveyard. Maybe with a big enough donation I could sneak away with a bag of onions. We compromised by choosing the best of the worst from the local grocery stores. We found out later that all Bermuda onions are now grown in Georgia.

Anyway, on to the Azores. Our plan was to head NE from Bermuda up to the latitude of our destination (38 20) and head E from there. "Everyone" says you need to go N to latitude 39 to get the SW winds from all the gales North of latitude 40+, while hopefully avoiding the gales themselves. You ride these SW'lies up and around the Azores High (no winds there, the doldrums). As we can power only about 800 miles with our fuel capacity, finding the wind for this 1800 plus mile trip was essential.

The 1800 mile passage took us 2140 nautical miles and 19 days. If it's true that time flies when you're having fun, then I thought we'd never get there. I hope you're interested in hearing what it was like for us being 19 days at sea, because I have nothing else to write about. I know you're thinking, "Oh no, here she goes about weather again." So let's get it over with.

We faithfully copied the High Seas Forecast each day and compared it with the weatherfax forecasts. Sometimes they agreed; often you'd swear the forecasts were for two different oceans. The two times we had significantly bad weather, the systems (a front and a low) didn't show up in either forecast till the day after our weather started. We don't even listen to the weather anymore. The weather is what the weather is.

And for us this trip it's been a very mixed bag. Our ship's log brags about all the beautiful 70ish, sunny days with light SW'lies toward the end of the passage when we ran toward Horta under spinnaker and main for days at a time. But it also reflects our depression and frustration when two days out we ran into a huge stationary front. We didn't see a hint of the sun for 11 days! Thank heaven for Satellite Navigation. We'd not have been able to get even one sun, moon, or star sight in all that time. We had rain off and on and the wind was from almost any direction at anywhere from 5 knots to 30 necessitating frequent sail changes. As the front dissipated it spawned a 994 millibar storm centered just 100 miles N of our position. This gave us 1 1/2 days (felt like years) of Force 8 and 9 conditions (35 to 40 knots wind, 15 to 20 foot seas). 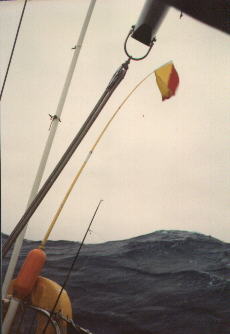 GH >>>> Well, maybe. We had been running for three days with the Bermuda/Azores high to our right and a developing low behind us over Nova Scotia. The winds were Beaufort Force 6 to 7 and the seas were 8-10'. The afternoon this picture was taken the winds started to clock and rise and the barometer was 995 and dropping rapidly. The High Seas forecast was for Beaufort Force 9-10 before morning. I shortened down to max reef main and the storm reef in the staysail and hove to at dark. The wind rose during the night and we were measuring a steady 45 kts at deck level. The low passed us maybe 75nm to the North and by morning the winds were below 25k. The wind wasn't up long enough to develop big seas. We were lucky. The casualty in the steering was my fault; when I hove to, I tied the tiller with no give. I now have a rig with 0.5" elastic cord to relieve the shock. We got through the storm and I learned. <<<< GH

After a whole day of the boat lurching wildly, seas sweeping over the cabin top, and wind screeching in the rigging and flogging our reefed mainsail, George had had about enough. Looking up into the sky from whence cameth all that fury, he yelled, "Give us a break!" His request was answered speedily, "SNAP!" A sound like a shot from the cockpit. Our "break" came in the form of a broken tiller fitting. The force on the rudder from Promise falling off a wave broke not the wooden tiller for which we carry a spare, but the bronze tiller to rudder fitting for which we don't. Two pieces of a massive bronze casting snapped like matchsticks and left us without steering in a storm 1,000 miles from the nearest land. It was enough to give even me religion.

In a race with time and the weather we piled all our spare part odds and ends in the middle of the cabin, searching for something with which to jury rig some steering. We came up with two stainless steel plates, rigging extenders, that George had grumbled about paying $20 for in Miami, and then didn't use and didn't return. Two hours later we had steering but not sturdy enough to withstand heaving-to in a storm. We hand-steered till morning. It's said that in time you forget the bad and remember the good. Not likely in this case. The storm ended with the coming of the rain, and within 12 hours the seas had subsided. We had delightful weather with light winds for the rest of the way to Horta. It was idyllic.

Well, that was the weather report. That leaves the fishing report. We have now dragged our lures for approximately 1500 miles. We finally got some fish! It's waiting for us in the freezer of a 50 foot catamaran owned by our friend Pierre who was a few days behind us on the crossing. They caught a 52 pound tuna and cleaned and wrapped for hours. They're saving a big chunk of it for us. Now that's my idea of how to "get" fish - already cleaned and ready to cook.

Let's see. What else is there in the passage log besides weather and fishing? Not much. Other than weather, there isn't anything to see at sea except sky, ocean, Portuguese Men of War (we passed one every several minutes), the occasional freighter (about 15 total in 19 days), frequent visits from a dancing dolphin troupe, a whale (a 50 footer passed right by us spouting his way West on the surface), and birds.

I 've been amazed to find birds at sea 1,000 miles from the nearest land. Gulls, long tailed Tropic Birds, and a medium sized brown bird someone said is a Shearwater. I don't know much about birds but did get a close look at one. One rather windy night we had our spreader lights on during a sail change, I stepped onto the side deck to release the boom vang when a brown bundle fell to the deck at my feet. Poor little thing was so exhausted it just huddled there staring up at me as I edged past to go forward. It finally dragged itself by its wings up under the dinghy. Guess it recovered and flew away as it was gone the next morning. Our first hitchhiker at sea.

Other than bird and Man of War watching, we pass much of our time with Ham radio. We have regular schedules with W6UZ and K3BC. Not only is it fun talking with them, but they also hold our daily positions in case of emergency, and it sure sets our minds at ease as each day passes without any emergency messages from home for us.

The 19 days finally passed, and we're here. It was worth every minute. Landfall in the Azores is impressive. The first land you see from about 60 miles away is Pico, a 7711 foot volcano that rises from the ocean floor 4000 feet deep. We've only been here two days, and much of that time was spent resting and desalinating, so can't describe the islands. We plan to stay here through the first week of August and then tackle the third and last leg of our voyage to Portugal. Of the 4200 nautical miles from Florida to Portugal, we have done 3440 and have only 760 to go! Time to close. We're off to sample some of the local seafood, cheeses, and wines. So, adeus for now.