I think you last heard from Promise just after we reached Marseille. Remembering back to August and our first days in France, I recall reading that Van Gogh cut off his ear after being driven mad by too many days of Mistral winds. We believed it after sitting in Marseille (with only 20 miles to go before entering the canals), trapped by 2 mistrals in succession - one with recorded winds of 81 knots! We stayed safely tied up in Marseille enjoying dinners of Bouillabaisse and watching the street dancers till both mistrals passed. Then we ducked into Port St. Louis where we had our mast pulled only 15 minutes after we docked. We were marvelling over French efficiency when they dropped the mast. There didn't seem to be any damage so we exchanged Gallic shrugs with Jean Louis, owner of the boatyard, and pointed Promise's bow up the Rhone.

Our general course on the rivers and canals of France and Belgium to Holland was NW, but often the compass registered anything but NW as we followed a twisting, turning route of about 1,000 kilometers. In the M/V Promise we climbed over a mountain range, descended into the valleys, climbed over a second mountain range, descended again into Paris, up again and then on down-hill again to Holland. To do all this up-and-downing, required going through over 200 locks. 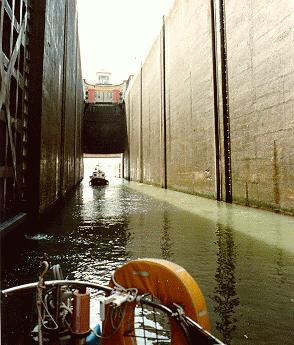 And what are all those locks like? Well, going up a big one is quite an experience. You pull into this shadowy, dripping, slimy- walled, 85-foot-deep box. Two huge steel doors (each door is about 22 feet wide by 95 feet tall!) ponderously clang shut behind you as you rush to tie to a floating bollard which rises up the sides of the lock with the water level. Then the lock keeper in his control tower 150 feet above lets in the water, and your boat slams back and forth against the lock wall while you are lifted 85 feet! Luckily you've draped the sides of the boat with car tires, and thank God for the slime on the walls over which the tires slide nicely. And everyone survives. (You've heard the expression "When in panic, when in doubt, run in circles, scream, and shout.") Here is a large lock on the Rhone, near Avignon, France. We had been waiting for an hour for the commercial vessel entering behind us.

However, our lock experience also extends to the manually cranked locks where you drive in, one of you leaps ashore to tie the lines to fixed bollards, crank the lock gates closed on your side while the lock keeper cranks his/her side, help crank the sluices open and closed, help crank open the forward gates, compliment the lock keeper on the beauty of his/her flowers/children/dogs/cats/sheep/chickens, and somehow scramble back aboard as your partner drives out the far end of the lock. (Try doing this 20 times a day, and you'll see why we took turns doing the leaping ashore and cranking.) 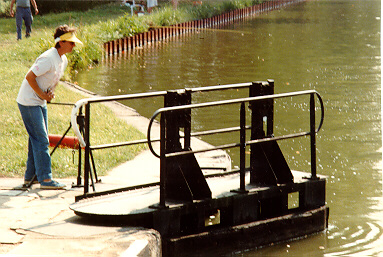 I must admit our first few locks of each type were a bit nerve wracking. In our first "up-going" medium sized lock I climbed the 30 foot slimy, spidery ladder with the bow line between my teeth (dumb, I know, but I truly didn't have a split second to do otherwise) as George manuevered the boat around below me and struggled with the stern line. As I reached the top of the ladder I was so elated I shouted down to George, "I made it!" (Even dumber.) The line promptly plummeted out of my open mouth 30 feet into the water below. ("When in panic, when in doubt....") It really does get easier with experience, and in the large commercial-ship locks of Northern France and Belgium, George got so good at "locking" he didn't even need assistance. 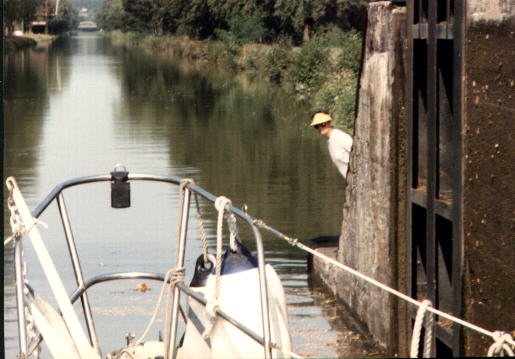 Going down, there is the problem of getting back on board. There is generally a path down the lock to a point where it's possible for the helms(wo)man to plant the bow of the boat into the bank and the crewmember can scamper aboard. 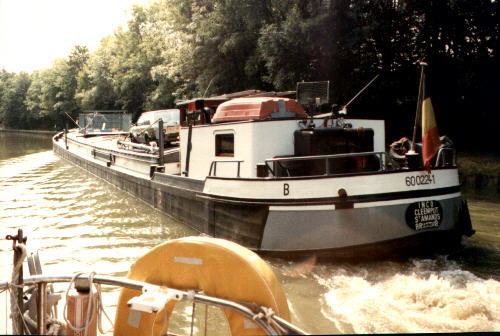 In the small canals, overtaking is just about impossible. If you get behind a laden peniche you can't pass and you are in for a long day. Opposite direction passing is necessary and scary. It doesn't seem that there is enough width to do it. The drill is for Promise to stay on her side favoring the middle and let the bow wave of the peniche to push you aside. You ride the water displaced by the huge barge until you are almost passed and then swing to the middle before the wake drops you in the mud. The first few times were scary. It fact ALL the times were.

Of course, not one of the lock keepers spoke any English. My high-school French seemed to suffice in France and Belgium. I even had a conversation with a lady lock keeper about how there had been no rain, and her sheep only liked to eat the grass at the edge of the canal. And her flowers. "C'est la vie," she said.

Between locks there's anywhere from 0.3 to 15 kilometers in which to relax and enjoy the countryside. Often the smaller, French canals were so overgrown and narrow that branches fell on board, and fishermen had to lift their poles for us to pass. We always wished them "Bon chance." Many of the rivers and canals wind through cattle fields and vineyards, past magnificent castle-like chateaux, and through quaint little towns where you can stop in the early mornings for a freshly baked baguette and some croissants. One early morning as we motored slowly through the mist to our first lock, a hot air balloon drifted just over our deck and silently disappeared over the fields.

We've also gone over "water-bridges". That's how we crossed the Loire River - on a bridge where instead of pavement for cars, there's an elevated canal of water for boats. It really felt strange. And we've had our first encounters with peniches - canal barges - which are slow, ponderous, heavily-laden, and very difficult to pass. Some canals are so narrow and the water so shallow that the peniche and Promise would each go aground on opposite sides of the canal and plow through the bottom mud until we'd passed with inches to spare or collided. (When in panic, when in doubt....) Most of the peniches were cargo-carrying, but some were "hotel barges". As one passed with inches between their hull and ours, we exchanged greetings with the people in the swimming pool built into the bow of the barge!

The canals of Northern France and Belgium are for large commercial traffic, and Promise would have to wait while four 250 x 40 foot barge-type ships jammed themselves into each lock. And then we'd rush into the tiny space left over behind one of them. One day a bridge broke and caused a huge traffic-snarl of these large ships and Promise. We almost got squashed, literally! We felt very tiny and fragile surrounded by 30 some ships playing bumper barge while trying to be first through the bridge as soon as it was fixed (...run in circles, scream and shout!).

The trip through France was super. In Paris we saw all the usual sights, Le Tour Eiffel, Le Louvre, Notre Dame, Le Rive Gauche, Le Supermarche, Le Landerie, Le Hardwarestore, Le Hotshowers en Le Marina, Etc.. We got used to very good champagne-like sparkling wine on every occasion. The only occasion necessary being that a bottle costs about 10f ($2). The people were friendly and the countryside charming.

Between France and Holland lies Belgium. We were in it for 2 days. An unbelievably neat country. They even plant their forests in precise rows. What can I say after just two days?

So, here we are in Holland. On the North Sea. For the winter. (Ah, well....) Vlissingen is charming, but more about that next letter. Tot straks.