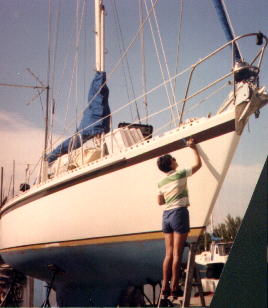 After a very hectic several months of provisioning, last minute projects, saying good-bye to our friends, and selling the car, we finally left Florida on May 10th bound for Bermuda. The "to-do" list was incomplete but we hoped that the important things were done. The hull trim stripes even got a touch up.

For my first long passage at sea I was looking forward to the "milk run" George promised, drifting to Bermuda under moderate SW'ly winds, eating freshly caught Mackerel and Dolphin, and finally, being bored by the lack of excitement. We would have fun!

...we had four days of calm. We motored. We trailed a fishing lure. Well, actually about three different lures, at about four different depths, and five speeds. Not even a sign of interest form our intended dinner. I happened to look back at the line one day to see a three foot Mackerel swim up to our line, jump over it with a triple gainer (well, at least a double) and continue on his way out of sight. In came the line. Are we having fun fishing?

...the weather forecast threatened a 30 knot NE'er so we headed N of our rhumb line to take advantage of it. It never materialized. The 30 knot NE forecast turned to SE at 15. A GOTTCHA! courtesy of the National Weather Service. Now we're North trying to make up miles to the South against SE winds.

...the forecast and winds finally agreed on SE'ly. We fought our way South back to the rhumb line.

...the low pressure that was to cause our NE'lies at 30 materialized again, and we were told we would probably have NE at much higher than 30 knots. In fact, it was already blowing 70 knots in Haiti and knocking down telephone poles. And it was heading our way. Now, this was a bit much. We turned on the engine again and made time to Bermuda. Promise could take 70 knots, but it'd be a bit hard on the crew. At least we think so.

...the low disappeared from the weather maps the next day, and we were back to SE and E'lies 10-15. Wind on the nose again, but at least we could tack.

...our friend "the low" magically materialized again in a midnight forecast and had become a tropical depression. the good old National Weather Service was issuing a Tropical Storm Warning for our Position! By this time we were about 2 days out of Bermuda. We dip-sticked the fuel tanks and decided we had enough fuel to motor again toward port. With our weather luck this depression would become an out-of-season hurricane and land on us.

...after we used much of our fuel running for Bermuda and safe harbor, the depression was called off for us. It would turn West and not be a factor. We could count on SE to E'lies 10-15. Not great and still on the nose, but we'd take it. (I'm sure all this is very confusing, but can you imagine how we felt?)

...we sighted the SW end of Bermuda. It was time to turn NE for 15 miles, and we'd be in! Finally, the wind wouldn't be on our nose. We even made Ham Radio phone patches home to Richmond and Spearfish to report our safe arrival.

...the wind picked up and switched within minutes. It blew 25 to 30 knots out of the NE! It blew that way for the next 24 hours. And that is about how long it took us to tack our way the 15 miles NE to St. George's Harbour. (We were also bucking a 2 knot S setting current.) Promise did beautifully sailing at 6 plus knots full and by, leaping off 10 plus foot waves into the wind and seas.

We made it to St. David's lighthouse at dusk. We were exhausted, almost out of fuel, and would have to sail into the harbour in 25-30 knots of wind. Are we having fun now? Harbour Control, over the radio from their high lookout tower, were kind enough to help us identify the marks in the rapidly failing light, and we sailed into the harbour to the cheers of those of our friends who got in the day before. If we had only left Florida 24 hours sooner, instead of waiting for a good forecast.

So, we're here. It took us almost two days to scrape off the salt and rest. One of the boats out in the same weather as we were lost the dinghy off the cabin top. It was washed off by a wave. We also read in the newspaper that a 33 foot trimaran sank about 200 miles from Bermuda during the weather. The people got in the liferaft, activated their EPIRB, and were picked up within 24 hours. The worst that happened to us was that we lost our boat hook which disappeared in a wave. Fun weather. The fact that the wind was a little strong and from the wrong direction wasn't the real problem. The real problem was that we tried to plan our course according to the weather forecasts. We'd have been better ignoring them and following the rhumb line all the way, taking the weather as it came. But then, a forecast for 70+ knots gets your attention and creates the desire to avoid the worst of the wind if possible. Our mistake.

As badly as the weather-forecast god treated us, however, lots of things worked really well. First of all, Promise. We now have full confidence in her to take care of us through anything. She sails like a demon and is solid, safe, and comfortable. As comfortable as any 36 foot boat can be with the rail well under, sea water rushing down the side deck as she leaps from 10 foot wave to 10 foot wave, with wave tops being blown over the cabin to pour gallons of cold sea water on your head and down your neck every few minutes. Are we having fun yet?

Another pleasant surprise was how well our watch schedule worked. We did "three on, three off" during dark hours and "six on, six off" during daylight. G took the cockpit watch from 6 pm to 9 pm, I took 9 pm to midnight, G again from midnight to 3 am, me from 3 am to 6 am, G for a six hour watch from 6 am to noon, and me for my six hour from noon to 6 pm. It worked well. The three hour watches were very formal and not to be varied except in an emergency; the six hour watches very informal with "watch for me for a little bit while I...." allowed.

Another thing which worked well was Ham radio. We were in constant touch with the outside world if we wanted. There were 4 boats within about 300 miles of us on which there were also Hams. Although we were never within sight of each other, we kept regular radio schedules to swap positions, wind and weather conditions, and sympathy when the going was less than perfect.

Something else which worked fairly well was the crew. Much to my surprise I didn't do anything really stupid during the passage and actually managed to conquer my fear of the ocean, sleeping whales, surfacing subs, rogue waves, 65 foot squid, etc.. I'm ready to go on to the Azores.

Bermuda is beautiful with varied vegetation and land formations; the towns clean and prosperous; the people warm, outgoing, and happy; the standard of living quite high. And quite English. George loves the pubs where you can get a pint of Courage. The only drawback is that it's very expensive here, especially eating out. We're very happy we stocked Promise to the gunnels before leaving the states.

We're anchored right in front of the famous St. George's Dinghy Club watching the Daytona to Bermuda race boats come into the harbour. Although they haven't many finishers this year as many entrants dropped out because of the weather. We've also enjoyed our front row seat for watching the parade of cruise ships in out of the harbour. They are gorgeous. And unbelievably huge! When in town today, George asked one cruise ship passenger how the food on the ship was. The man gave it high ratings. The service also. Thinking we were from another of the cruise ships, the man asked in return how the food and service on our ship was. George, with a remarkably straight face, gave the food and service on our "ship" a high rating also.

So, we're looking forward to a fun two weeks playing tourist here. But, I'm sure the time will go fast, and we'll soon be at sea bound for the Azores. We'll write again from there. Remember it's at least a 20 day passage. Don't expect to hear from us too soon. Till the Azores, take care.